Comments Off on Parent Snap 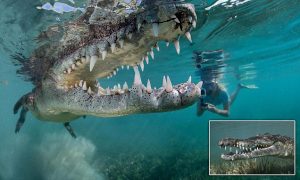 JARDINES DE LA REINA, CUBA: INCREDIBLE video and still footage shows how a wildlife obsessed father took his daughter swimming up-close and personal with a potentially lethal two-hundred-pound crocodile. The eight-foot-long reptile opened its mouth, flashed a glimpse of its razor-sharp teeth and flexed its long, strong legs when the camera came within two inches of its mouth. In a bid to prove how impressive these fearsome hunters can be, the up-close images provide a close view of the large predator while the video shows the crocodile try to gobble up the camera. The shots were taken by one of the worldís leading underwater photographer and publisher of Alert Diver magazine Stephen Frink, (67) from Key Largo, Florida Keys when he took a trip to Cuba with his daughter Alexa (23).