Comments Off on Rescue Station Saved 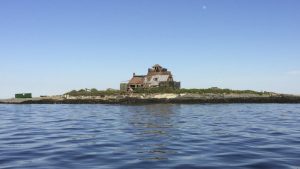 In this June 2016 photo provided by Sam Reid, a century-old rescue station sits on Wood Island at the mouth of the Piscataqua River at Kittery Point, Maine. The long-shuttered building, once an outpost of the defunct United States Life-Saving Service, was later decommissioned in 1948. The structure has been undergoing restoration beginning in summer of 2016, with plans to turn it into a maritime museum. (Sam Reid/Wood Island Life Saving Station Association via AP)