Comments Off on France Truck Attack 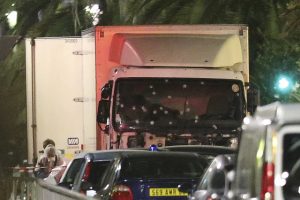 A policeman stands, watching the truck used for the attack near the scene of an attack after a truck drove onto the sidewalk late Thursday, and plowed through a crowd of revelers who gathered to watch the fireworks in the French resort city of Nice, southern France, Friday, July 15, 2016. (AP Photo/Luca Bruno)