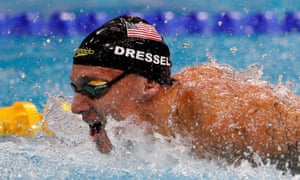 Thursday 3 August 2017 05.00 EDT Last modified on Thursday 3 August 2017 05.01 EDT    Caeleb Dressel knew the comparisons were inevitable. The 20-year-old University of Florida student had barely toweled off after capturing his seventh gold medal at last week’s world aquatics championships when he found himself cast as the heir to Michael Phelps as the face of swimming in the United States and, potentially, the world.Not only had the American sprinter become the first swimmer to win seven golds at a single worlds since Phelps in 2007, Dressel joined Phelps and Mark Spitz as the only swimmers to win seven titles at any long-course international championship.  Read more…