As part of the Lifeguard team and now ever present on the beach in the port of Sagunto, Spain, the Auxdron Lifeguard Drone was ready and waiting as one of the Lifeguards sounded the alarm that there were people caught in an undertow and looked like they needed help. This event happened on Wednesday the 15th of August on a beach known to have strong undertows under certain conditions. The Lifeguard team are well aware of the danger and are trained for these specific situations. One of the most important parts of such a rescue is the response time to the victims. Adrian Plazas and Enrique Fernandez were two Lifeguards who knew this more than most. Together they started a company to design and build a Drone that was capable of saving lives. Three years later their vision was realised when the drone, they developed, saved the life of a woman caught in an undertow that could have cost her life.  READ MORE… A Sandbar Beach lifeguard was recognized Tuesday night for rescuing a 20-month-old boy at the beach in July in South Glens Falls. Post-Star file photo

SOUTH GLENS FALLS — A toddler nearly drowned at Sandbar Beach last month, but was rescued just in time by a lifeguard. The incident happened July 21, just after 3 p.m. A boy, 20 months old, was playing in the water with his mother.Lifeguard Sabrina Quintois, 19, had suggested that the boy wear a life jacket or puddle jumper. But his mother said he could swim — an unlikely feat at his age. Sure enough, as Quintois scanned the water for any signs of distress, she saw him slip under and not come back up. She blew her whistle and dove in. On the other side of the beach, another lifeguard saw the same thing and also ran for the water. Before he could get there, Quintois had reached the boy and lifted him out of the water. His mother was standing nearby but hadn’t realized the danger. “The child was not coughing or breathing,” said Supervisor Todd Kusnierz, reading from the report Quintois wrote. She administered three back blows in an attempt to restore breathing, since his heart was still beating.   READ MORE…. 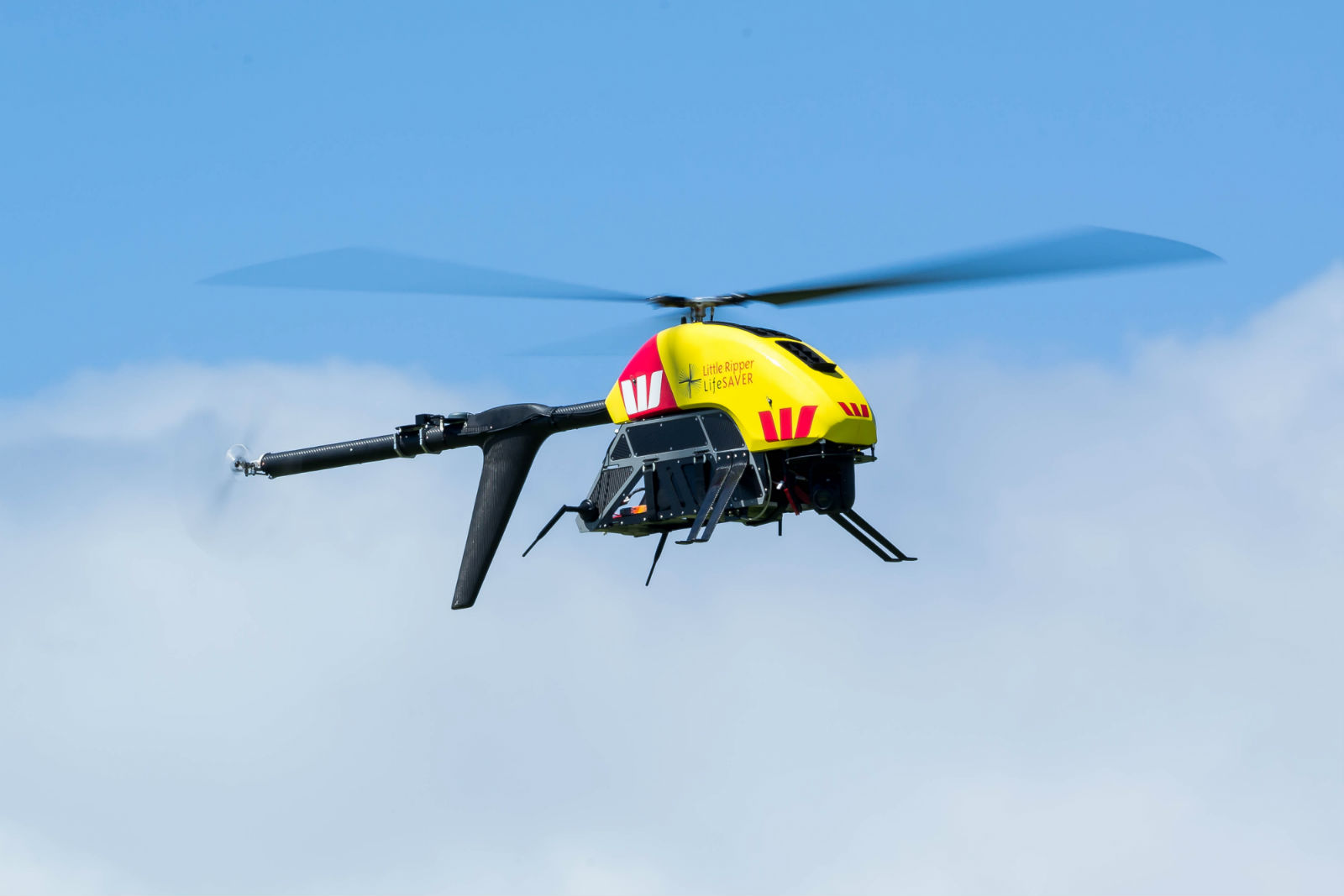 Australia’s ‘Little Ripper’ drone has saved a pair of swimmers caught in rough seas in what’s thought to be a world-first rescue operation. Lifeguards were busy testing the UAV off Lennox Head as part of New South Wales’ $250,000 shark-spotting strategy when the distress call came in. Within 70 seconds the aerial helper had tracked down the stranded duo and dropped them a flotation pod, which they used to safely make their way to shore, according to The Sydney Morning Herald.

Comments Off on Extraordinary photos of survival in Houston

Extraordinary photos of survival in Houston Hurricane Harvey turned interstate highways into rivers and put numerous subdivisions around Houston under half a dozen feet or more of water. The most powerful hurricane to hit Texas in more than 50 years, Harvey lingered along the Gulf Coast, drenching the region with a year’s worth of rain in the span of a week.

These photos give an intimate look at the current efforts to rescue residents and shelter evacuees.  Read more… The Duluth Fire Department and Great Lakes Unmanned Systems tested a type of drone that can perform water rescues on Lake Superior, Tuesday afternoon.  The water rescue drone is called the EMILY, which stands for EMergency Integrated Life-saving LanYard.It is only about 25 pounds and goes up to 22 mph.  The equipment is made by a company out of Arizona, but is being used all around the world.  READ MORE…..

Comments Off on Panama City Beach crowd forms human chain to save a family trapped in a rip current – CNN.com (CNN)A family stuck in a rip current narrowly avoided a tragedy when a crowd of strangers linked together to bring them back to land.Nine beachgoers, including two children and an elderly woman, were trapped in the current at Panama City Beach in Florida on Saturday. Bystanders on the shore saw them yelling and waving their arms, and they jumped into action.”I saw a group of people, a few at first, and then more and more, start forming a human chain,” witness Rosalind Beckton told CNN.The chain grew to around 70 to 80 strangers, all holding hands and stretching to reach the trapped group. All of the swimmers made it out. READ MORE….

Monday, May 1, 2017,  – Good Samaritans in Texas worked together to rescue an infant and toddler from an overturned vehicle trapped in a torrent of flood water on Saturday (April 29). The video featured above shows how the dramatic rescue unfolded. With the help of tools and their bare hands, passer-by’s were able to pry open the doors and get inside. The good Samaritans then dragged the children to safety and helped to resuscitate them. The children’s father was also in the vehicle, WFAA reported.The incident took place near Myrtle Springs — about 10 miles north of Canton where a deadly tornado left a path of destruction. According to Phillip Ocheltree, he and his family were leaving their home to escape flooding when their truck “hydroplaned” off the wet road and flipped into a ditch. On his Facebook page, Ocheltree said that his baby son, Marshal, was doing well and that his two-year-old daughter, Addy, was “stable and doing much better,” late on April 30.

Pieces of a sailboat that crashed against the pilings of the Redondo Pier wash up in the waves inside of the municipal pier. Photo by David Mendezby David MendezFour people were rescued near the Redondo Pier when their sailboat capsized and crashed into the pilings Thursday evening. The crash happened just after 7 p.m. when a sailboat exited King Harbor headed south amid high winds.“I saw them leaving the mouth of the harbor, and they were having trouble catching their sails,” said Jason Wells, a witness to the crash.The boat rocked against the wind and waves before overturning near the horseshoe pier. Pieces of the dashed boat were visible from around the pier.Units from both Redondo Harbor Patrol and Baywatch Redondo were on the scene within minutes. According to Redondo Beach Fire Division Chief Bob Rappaport, rescue swimmers were deployed, pulling each of the four wayward sailors out of the water and onto the shores. Two ambulances and units from L.A. County Lifeguards were also on scene.The four rescued were being treated for mild to moderate scrapes.

A fire crew in Oklahoma City responded to an “udder-ly” bizarre scene this past weekend — a cow stuck in a neighborhood swimming pool, officials said.A resident had been drinking his morning coffee Sunday when he heard some sort of “snorting” coming from the pool area and went to investigate, according to a Facebook post by the Oklahoma City Fire Department.After finding the cow had fallen through a hole in the pool liner, the resident called 911, the fire department wrote.  Read more Firefighters rescue cow stuck in swimming pool in US Firefighters have rescued a cow from a swimming pool outside a home in Oklahoma City.Emergency responders arrived after the home-owner reported hearing some sort of “snorting” coming from the pool area.They discovered a hole in the swimming pool’s liner and the animal trapped in the water.Oklahoma City Fire Department Battalion Chief Benny Fulkerson said firefighters used their pumps to remove about five feet of water from the pool so the cow would not experience hypothermia. SAN ANTONIO – The heavy rains on Monday morning kept the San Antonio Fire Department very busy with dozens of high water rescue calls across the city.A fire department spokesperson said there had been 30 calls for high water rescues as of 7 a.m. and the ci

Calls for lifeguards to be installed on beaches – Cambrian FURTHER calls have been made for lifeguards on Dwyfor and Meirionnydd’s beaches.

Source: Calls for lifeguards to be installed on beaches | News | Cambrian News

Comments Off on How dangerous is it for untrained bystanders to perform water rescues?

How dangerous is it for untrained bystanders to perform water rescues?

In recent major flood events, dozens of videos surfaced on social media of what appeared to be average citizens successfully rescuing people trapped in their cars amid high water.

Comments Off on Water rescues could be enhanced with new certification in Myrtle Beach | WBTW.com

Water rescues could be enhanced with new certification in Myrtle Beach | WBTW.com Source: Water rescues could be enhanced with new certification in Myrtle Beach | WBTW.com

Firefighters responded to a car that was stuck in high water in north Abilene after heavy rain poured over the area Tuesday afternoon.